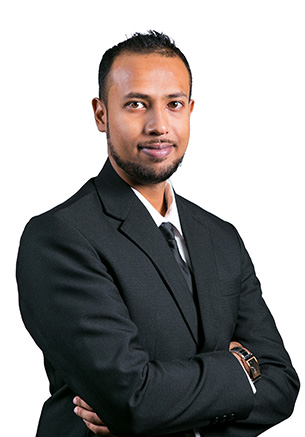 Keshav Bahadursingh is an Associate in the Litigation Department of Lex Caribbean’s Trinidad Office.

He received his Bachelor of Laws in 2015 from the University of the West Indies, Cave Hill, Barbados and his Certificate of Legal Education from the Hugh Wooding Law School in 2017. Keshav was admitted to the Trinidad Bar in November 2017 and joined Lex Caribbean in February 2018.

Since joining the firm, his areas of practice focus on Civil and Commercial Litigation which include Contract, Personal Injury Claims, Employment, Mortgagee Actions and matters involving Arbitration. Keshav also provides legal advice and opinions to the firm’s clients, working diligently to achieve client satisfaction on each of his matters, and has appeared at the High Court, Court of Appeal and Industrial Court.

Keshav is an avid musician who attained Grade 4 certification in both the Theory and Practical components from the Associated Board of the Royal Schools of Music. He plays the piano, keyboard and several East Indian instruments, gaining a wide appreciation for a variety of musical genres through his experience with several musical bands.

Keshav is also a passionate sportsman who enjoys participating in and observing several sporting activities which mainly involve cricket, football, volleyball and table-tennis. He represented Naparima College in these areas and also played cricket competitively for the Preysal Cricket Club; South Zone divisional teams in the Trinidad and Tobago Cricket Board’s National Inter-Zonal League; and was a member of the 2009 Trinidad and Tobago National Secondary Schools Cricket Team’s tour to Antigua.